What I am now calling the Thane-class, the AT-AT Barge is finally finished; though I have yet to write the backstory. Please check out the build log and the thread at Keeper of the Force, and please feel free to comment. Cheers! 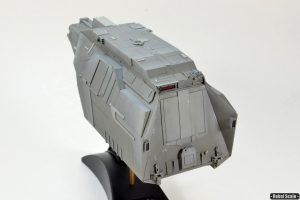 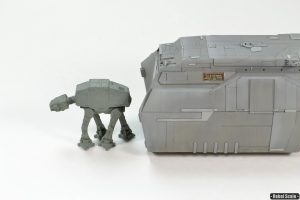 I threw about 2 hours or so into it yesterday primarily focusing on finishing up the painting. I also did some chipping using Vallejo paints.

Here’s the menacing front. I emulated the viewscreen based on the AT-AT walkers. I painted it red. Then I added a highly thinned Life Color black shade. The water in the acrylics wicked along the edges making it appear to glow. Chipping was done with mostly white paint. I know that after the filter stage, it will tone the white down a bit. 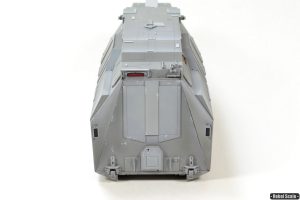 For the blown out panel, I just painted everything very lightly with a few yellow hoses. 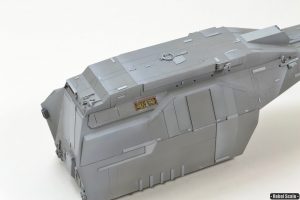 Finally, I painted the greeblies on the underside various colors and finished it off with some chipping. I used the sponge method for most of the chipping, then I came back with a tiny brush to add a few larger chips. 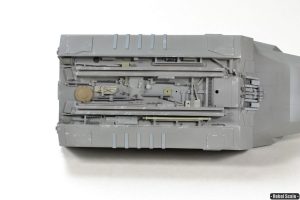 Here’s what I accomplished a few days ago. I airbrushed the modulated greys using Life Color paints. Then I hand-brushed the small raised panels with Vallejo paints. Of course, most of the contrast will lessen as I apply filters and other weathering techniques. 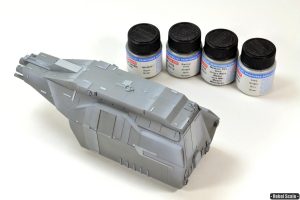 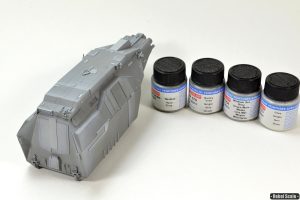 So my latest project wasn’t actually a model, but a modification of Northwest Short Line’s The Chopper. I had had problems with The Chopper being able to cut really thin styrene. I also had a problem with the blade chipping away at the pressed wood base. In talking with someone at Keeper of the Force, he showed me a similar modification he did, which I copied.

In rebuilding it, I used a solid piece of wood instead of the cheap cardboard like base. I used a Dremel to router away a small square inlay where I could glue a piece of glass. I used a cheap mirror, so I had to sand the mirror finish off the back. Then I painted it black for easier visibility against white styrene. The glass gives the blade a hard surface to cut against instead of chipping away at the wood.

I then used a stainless steel ruler with metric markings, and mounted it in place with the 15cm mark where the blade comes down. I had to glue down the brass grommets, but everything seems to work well for now.

I’ve been doing some recalculations on some of the ships, particularly the fighters. After looking over the Millennium Falcon Owner’s Manual, as well as comparing the models I have, I changed my estimates for the TIE Fighter, TIE Advanced x1, and the A-wing. The TIE looks to be 8.2 m; the Advanced x1 is a little shorter at 7.6 m. Finally, the A-wing is a mere 6.9m, though I could see it being even shorter. I also doubled the length of the Mon Calamari Home One cruiser based on images from Wookieepedia to 3200 m.

In the future, I plan on doing pages dedicated to discussing the sizes of many of these ships.