So, I was approached by a fan of the site asking for a Republic Gunship commission for his son. After slaving over those Frigate models, I really didn't want to do commission work. HOWEVER, I haven't finished a model in over a year now, so maybe having a deadline will help.

For this commission piece, I'm using the Titanium Ultra Republic Gunship. It's the cheapest and most available Gunship model available that ALSO has the beam turrets mounted on the sides. It is a respectable 18.3 cm wide (or a little over 7 inches). And, despite being mostly metal, the detail is pretty good. The side-doors do not slide out like the Action Fleet version, but it's actually more accurate in other ways. So, all in all, this is the best option for a custom Republic Gunship at this time. Hopefully, we'll get a nicer model in the future.

I'll be adding in figures and decals to represent the Separatist Nightmare version. However, I won't be painting the canopy green. It will still be red in the standard colors, but with cool weathering. 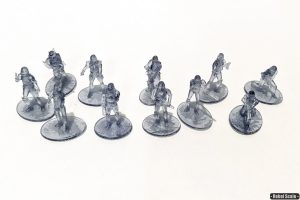 I was lucky to find a seller on Etsy, Lycan Miniatures, who makes reasonably-priced 3D figures. He makes a regular set of Clonetroopers and a Commander set with Cody, Rex, Fives, etc. 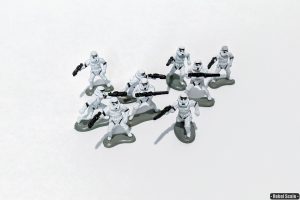 Now, I also bought a pack of Micro Machine Stormtroopers in case I wanted to make my own Clones like I did for the Action Fleet custom. 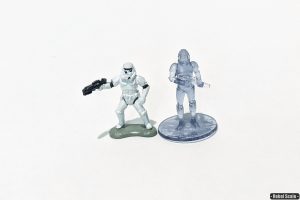 Here you can see the size different between Micro Machines and the 3D prints from Lycan Miniatures. The 3D prints are a tad taller, but not by much. They won't be perfectly in scale with the Gunship, but they will be close enough and still look great. 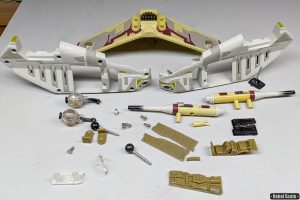 So, disassembling the Titanium Ultra was a little tedious. Apart from all of the screws, the plastic parts were VERY brittle. Basically, all of the yellowed plastic, the green/grey parts, and the black exhaust parts cracked or broke in one or more places trying to remove them. The clear parts and rubbery gun turrets are fine. Fortunately, I was able to use Tamiya Extra Thin to cement those broken pieces back together. If you are looking for one of these, expect the plastic to be brittle, especially if you see that it has yellowed. 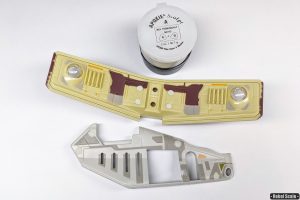 Using ApoxieSculpt, I puttied the many screw holes in the Gunship. I had to add putty several times to cover the openings fully. Luckily, ApoxieSculpt doesn't shrink and hardens really well. 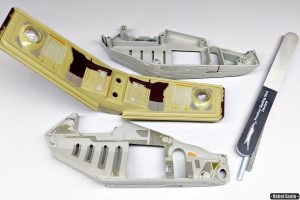 And here is the end result. I sanded all of the ApoxieSculpt down, even re-scribed the panel lines in a few places. You can barely see where the screw holes used to be. Also, I removed the bulky Titanium logo from the the bottom hull, which prevent the gunship from sitting flat. Lastly, I removed the molded-on rockets, as I intend to rebuild these. Check out the non-yellowed plastic where the rockets were. 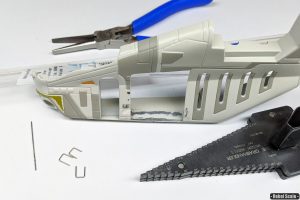 Up next was creating grab handles on the hull. Now, drilling plastic is pretty easy, but drilling die-cast metal is a pain. I broke 2 drill bits doing this. But, I was able to drill enough holes to mount 2 grab handles per side. I used .6mm nickel-silver rods, bending them using my trusty Grab-handler. While I had never used nickel-silver rods before, they behaved just like brass, just a little more durable it seems. 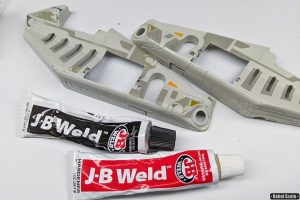 To attach the grab handles, I used JB Weld. I didn't want to risk them breaking. After the JB Weld dried, I could snip off excess wire and cleanup the excess JB weld. 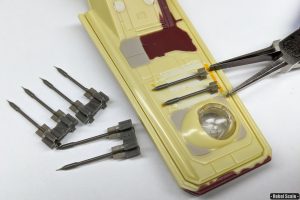 For those of you who don't know, the Republic Gunship actually carries 8 air-to-air rockets under its wings. The Titanium Ultra and Action Fleet version only have 3 molded into the wings, and they look terrible. So, I had to replace those with something that looked cooler. These are resin Eduard FFAR rockets in 1/72 scale. There's 8 to a pack, so perfect for me. 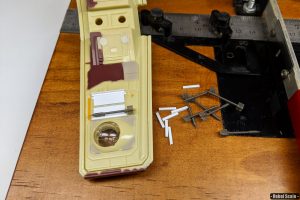 Here, I am adding plates to the underside of the wings using wide styrene strips. You can see my awesome Chopper in the background. Then, I mixed some styrene strips and channels to create mounts for the rockets. I won't be gluing the rockets on until I paint them later, but they fit perfectly. 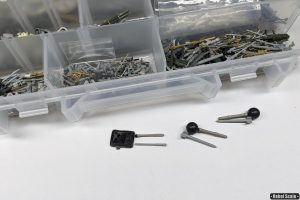 FYI: painting rubber/vinyl is really hard. The paint often flakes off. So, I decided to create new barrels for the 3 blaster turrets. I pulled out my tackle box of gun barrels and found some replacements. For the front turrets, I'll actually be trimming down some rockets into blaster likenesses. These will take paint much better, not to mention looking 1000 times better than the rubbery parts. 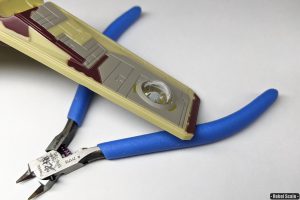 I found some 1/72 Pz IV hubcaps that looked like they would be good details for the Composite Beam Turrets. Each wing technically has 2 focusing beams, one above and one below the wing. Luckily, I have a whole set of these hubcaps. Adding them really enhances the Beam Turrets because there was nothing there previously. This should also make painting easier. 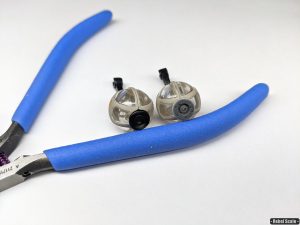 13 - Had to redo the Beam Turrets on the hull

In the process of redoing the wing Composite Beam Turrets, I kept referring to the manned turrets on the hull. After looking at them over and over, I couldn't take it anymore. I had to redo them. The detail is just bad. So, I had some random tank parts and tank muzzle break that was curved like a dish. So, after A LOT of dremeling, I was able to get them to fit. I had to drill out the molded-on turret, which left a lot of debris in the clear turret itself. TIP: use your airbrush to blast out debris you can't get to. 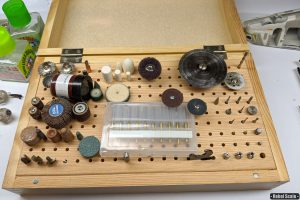 I bought this Rotary Tool Bit holder on Amazon a year ago, and it is AMAZING. My review is still the main one on there. It is perfect for Dremel bits of most sizes. Also, being made of wood, it will absorb any moisture and keep your bits from rusting. There's plenty of room, and even I haven't filled it up yet.