Unlike most of the aforementioned toys and collectibles, models come unassembled and usually unpainted. These require a good amount of time if you want to get a good looking model. Although, they are easier than creating a scratch-built or kit-bashed model. There aren’t many companies offering Star Wars models as licensing is a tricky issue. However, I’ll give you a rundown of the most common.

A [ * ] indicates these measurements were taken by others 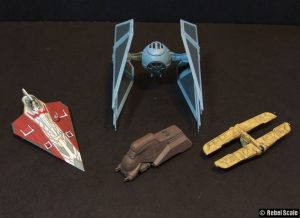 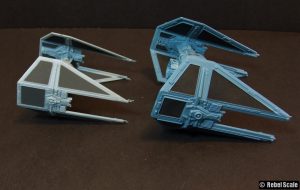 D5 Mantis - I think Bioware doubled the sizes of their ships so more players could fit on board. Ideally, I think this ship is closer to the Falcon's size, so I halved the 68 meter official reference to 34 m. This makes it closer to scale with the Fantasy Flight Falcon. If you want to go with the official size, double the reference and double the scale.

Liberator Cruiser - sources claim it's small, but carries 72 starfighters. 600 meters sets it at the same size as the Gladiator Star Destroyer and makes it fit most Armada ship scales.

MC19 Light Freighter - I just picked a number, no idea how big it is. I chose something larger than the MC18.

Razor Crest - based on stills comparing length to Sandcrawler

TIE Phantom - based on assuming FFG version is 1/270