A look at screenshots and other references of the HWK-290

The Moldy Crow, a HWK-290 ship, was Kyle Katarn's chosen vessel in both the Dark Forces and Dark Forces II: Jedi Knight PC games. Described as a fighter or scout ship, the Moldy Crow has had a wildly contested length for a long time. However, Wizards of the Coast first issued a canon length in it's Dark Forces RPG supplement, which was 29 meters.

Yet, if you look at the Dark Forces games, it is clear that the ship is much smaller, less than half the size of the Millennium Falcon. To the right are several screenshots from the two games. The Moldy Crow appeared in the cutscenes of both games, and you can see Jan Ors in the cockpit. This is perhaps the best example of it's size. Jan is sitting pretty high up in the cockpit. Furthermore, she would be practically unable to stand up inside the ship.

In-game screenshots show a smaller craft as well. You can see how the player character can easily jump on top of the wings in Dark Forces II. And you can see that looking at the ship from the ground, it appears quite small.

Finally, check out it's size relative to the Nebulon-B Frigate in the pics below. Remember how the Falcon was much larger when docked in the same location? 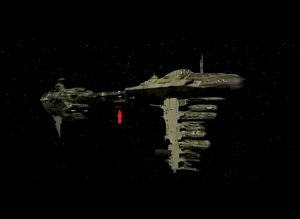 Cutscene with Jan Ors in the cockpit

When Lucasfilm relegated the EU to "Legends" status, the Moldy Crow lost it's canon status. However, only a few years later, fans saw the return of the HWK-290 through The Last Padawan comic series about Kanan Jarrus. Here, we see a much larger version of the HWK-290 with enough room for several people to stand up, walk around, and sit beside each other on the bridge. This particular version is larger, but not quite the old 29 meter size from Legends IMO.

At the same time, Fantasy Flight Games included the HWK-290/Moldy Crow in the X-wing tabletop game. Consequently, the game designers decided to go with the smaller version, closer to that seen in the Dark Forces series. The model itself measures 6.16 cm, which at 1/270 scale would suggest a length of 16.63 meters.

More recently, a length of 16 meters popped up as official canon length. 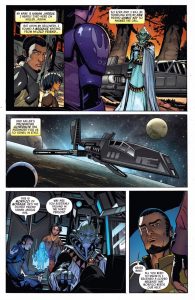 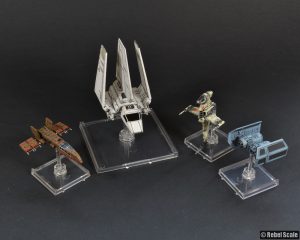 If you want to see how the ship would look like on the inside, check out these excellent fan-made cross-sections.

This one by MillenniumFalsehood shows a smaller version of the Crow, closer to the Dark Forces & FFG models.

This one by MatMoura shows a larger Moldy Crow size, like the Kanan comics, complete with bunks and a roomy cockpit.