Wizards of the Coast (WotC) is a gaming company, famous for Magic: The Gathering and Dungeons and Dragons. Their Star Wars miniatures line started in 2004 as a tabletop roleplaying game. Primarily, their miniatures consisted of figures (roughly 1/48 scale), but also contained creatures, vehicles, and starships in their Starships of the Galaxy release.

These minis typically used a rubbery-plastic, but a few larger vehicles have hard plastic bodies like the TIE Crawler & Viscount. In 2010, WotC decided not to renew their Star Wars license.

Unfortunately, the rubbery-plastic suffers notoriously from warping. Even brand new figures can arrive warped. Most of this can be fixed with the heat and cool method. Just heat up the plastic with a hairdryer or hot water, reshape, and then dip them in cold water. The cold water should "harden" the new positions. While this should fix most warping problems, I will warn you that the Star Destroyer is beyond repair. 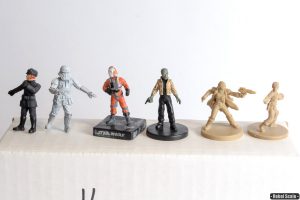