"Modeling is interpretation of the reality." - Mig Jimenez

Visual interpretation is probably the biggest factor for how we build and paint. We all see things differently, from colors to how mud sticks to tracks. To one person, a color may look accurate, but it may look completely off to someone else. And we also have to take into account how lighting and photos change the look of our models. Even our computer monitors display colors differently.

Take Panzer Grey for example. Panzer grey is incredibly dark when freshly applied to a tank. But it fades over time, collects dust, and never remains that factory dark grey. And when you apply it to a model 35 times smaller, it looks much too dark unless you lighten it a little.

So, even if we try to model realism, we are actually modeling an interpretation of what we think is real or appears real. As Mig also said, models are fake; if you want to build something real, go to a tank graveyard and build a real tank.

Does this mean we shouldn't try to achieve realism? Absolutely not. It's good to have a driving force behind our creativity. The point is to remember that our idea of real is just that, an idea. And not all ideas are the same.

Duende - the mysterious power of art to deeply move a person

Each model I build is a chance to try something new, a journey of sorts to create something wholly unique and wholly mine. While this may sound poetic, it's actually quite accurate. As an artist, I like to think of a model as a canvas, not just something to paint, but something to build as well. Even with a straight, out of the box build, we add our own touches in one way or another. Have you ever seen a model and immediately knew who the modeler was? We recognize patterns and aspects common to specific artists.

When I start a model, I like to ask myself the following:

This isn't to say that I build to impress others. But rather, I build to impress myself. It's not so much about making it better than another person's model, just different. Do we really need another Red 5 X-wing? And even if you want to, shouldn't you try something new with the finish or weathering?

Personally, I think the best models I have ever seen are the ones that are unique and tell a story. These are the ones you can look at and follow the details and rust marks as you would footprints in the woods. Think about great works of art, like the paintings of Van Gogh. His paintings depicted real objects, yet they were created in a way unique to himself. You can follow the brushstrokes, but also see the entire painting if you step back.

And I believe this is where artistic expression meets realism. Even the most chimerical models tend to look better if they have aspects grounded in reality. Think about the sci-fi models you have seen. They often have paint chips, rust streaks, mud, dust, etc. None of this makes a lot of sense for something that only flies in space, but it does add a touch of realism. And it creates enough familiarity that others can enjoy it and understand the story it tells.

So, I would say that in making a model, make it your own. Try a few new techniques and a few old techniques. Draw inspiration from the real world, but also yourself. For every panel line or paint chip, think about what caused it or what its use is. What story does your model tell about the battles it has seen, its crew, or even its artist? 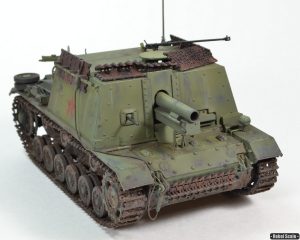 Here is a a model of a German tank in a fictitious scheme. Now it is true that the Soviets captured German tanks, repainted them green, and would often  add on track armor and guns. So there are real elements that combine to make an unreal model. 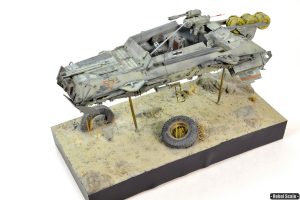 On the opposite end of the spectrum is a hovertank I designed myself. Everything about it is completely original. However, just like real vehicles, there are paint chips, rust, and dust streaks. There's also the rotten tires on the ground that depict a wasteland of sorts. You can see what the story might be.